The Essence of Art 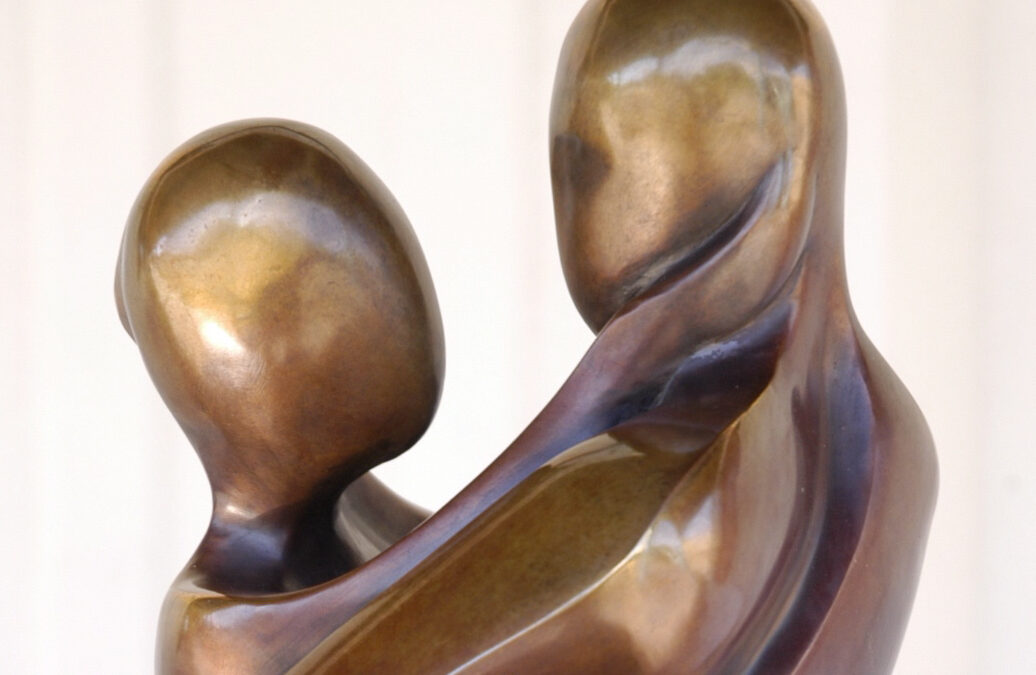 In this article, we will conclude our look at bronze sculptor, Shray. In our last post, we discovered that Shray is a woman of immeasurable curiosity and depth of introspection. Now, enjoy the rest of this look inside the mind and heart of a storied creator.

“The essence of art is the control of line weight.” This statement from Shray is deceptively simple while communicating a very complex truth. The most basic realities are often the most difficult to grasp, much less master.

It’s relatively easy to understand how this idea applies to drawing or painting. These are direct transfers of intent from an abstract, multi-dimensional continuum –– the mind –– to a tangible surface that can only be viewed from one side –– the canvas. But how the idea comes to fruition in the form of a three-dimensional figure is a bit more complex.

What does THAT mean?

Line weight. It is a term used frequently in art to describe the relative ‘weight’ of the line against the background or support. In simpler terms, line weight refers to the strength, heaviness, or darkness of a line. For Shray, the term isn’t just an expression of the line itself, it’s an attempt to convey her relationship with spatial perception.

In her early years –– even before grade school –– it was clear that Shray had an unusually complex understanding of space, time, mass and displacement. Her mother, an art major, wrote her master’s thesis in art using concepts from the stories that little Shray would tell. The toddler saw lines extending upward into space from the minds of all people. These lines were inter-connectivity, a fabric woven from the unseen energy of human thought and emotion.

Two-year-old Shray seemed to be constantly aware of the reality that all that is has mass –– even the things we cannot see. In our conversation, she explains how spatial information explodes into her consciousness with every experience, every touch, every sight.

When Shray speaks, you get the feeling that she has such a grasp on the abstract, that her mind must be a limitless expanse of possibility, of freedom. However, she says, “People think I have the freedom to live life more abstractly. To me it feels like NOT freedom. I’m constantly hyper-aware of the shape of all the things that I come into contact with. I am always inundated with the shape of things. It’s a massive amount of information.”

She continues, “When I go to the kitchen for a snack, I open the refrigerator and I am immediately conscious of the four lines of the handle, the eight lines that make the door, the sixteen lines that define to shape of the milk carton; even the lines I can’t see with my eyes, I can see them in my mind.”

For her, lines aren’t only defined by a metric of heaviness or density, they also communicate weight. They convey ideas and feelings of heaviness, mass and volume. So, the definition of line weight is a two-way street. They are defined and measured, but they also define and measure us. Shray shared a lengthy, poetic exposition of her thought process on the relationship between her and the lines on the canvas or the figure.

Here is an excerpt. “… And then, we start to dance on the edge of the lines, swirl with the smile as it appears and leads us to the tilt of the neck. Tools and colors, palettes and knowledge –– they meld, draining me, in each rapid gesture of the palate knife. Forms taking shape like a burst of gathered awareness.

I lean on the lines for support. The cubes take shape; they must breathe. I rest my mind on their edge, as more is pulled from me –– so fast–– constantly shifting my own weight as I watch the shapes gather strength in their own completeness.” 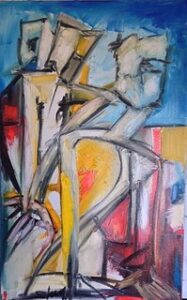 Here is a photo of an oil on canvas that Shray quickly painted to communicate the energy of lines and spatial relationship. The photo isn’t high quality, in fact, in this picture, the paint isn’t even dry yet. But she sent the image to help bring visual context to the conversation. These figures emanate from each other.

Interestingly, you can see the echoes of invisible matter around the figures –– almost like an aura. The piece feels like the image in the middle of a series of pictures taken with a smartphone –– it’s the one you might delete –– the one where everyone in the shot wasn’t quite positioned, complete with motion blur and candid movement.

A Matter of Matter

She continues the explanation of how her mind perceives lines. “Lines are created in space –– in emptiness. But because a line is taking up volume, it’s pushing out space to exist. When I use lines, I see the line in an empty space and it pushes the mass out so that the mass of the line can exist. It’s really a displacement of the space in my mind. That’s why when I sculpt, I don’t need to turn the sculpture to see the back. I can see the three-dimensional lines in my mind. I’m just connecting lines to redistribute mass. The lines carve out unseen mass to create themselves.”

She describes herself as being “fascinated with spatial relationships –– with mass replacing mass.” This idea, of course, led to a lengthy give-and-take on the reality that the matter of all things is interchangeable. Humans exchange matter with each other and the surrounding environment on a regular basis. And the matter we are made of was birthed all throughout the distant reaches of the universe. But that part of the conversation will be reserved for another time, another article!

When asked for the reason she has worked for so long to master the energy and presence of lines in her work, she said, “I’ve always felt that if I capture all of the lines, and they are balanced, then the finished piece makes the lines approachable. The finished work can be a place for peoples’ feelings to rest. If there’s enough space created, then their own manifestation of existence is revealed.”

When presented with the question, “When is art finished –– when the artist is done, or when the art is viewed?”, she replies, “Each person finishes the art. I have had my moment with the piece. But an artist wants to make it so that that same experience can be had by each person. It’s almost like an homage to thought –– to illustrate the enormous emotional and cognitive capacity of humanity.”

Art will forever be for the purpose of exploring and expressing the human condition –– the questions of existence and consciousness. Our timeline, our story often feels as though it has a baser motive – functionality. But art is acutely disconnected from function. And this is a very positive thing. For Shray, her process in ideating a new piece is very mystical and internal.

“I focus on nothing. I allow myself to exist and let my imagination tell me what I should do.”

Since, for her, sculpture is about displacement and carving space into the fabric of existence, it makes sense that she would focus on what her mind can see. This seems to be the only way to start “carving space”. 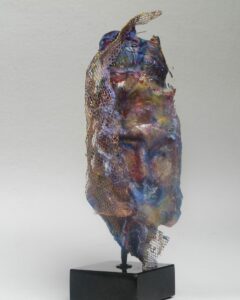 Shray reflects on the proper role of sculpture. She draws a distinction between humanity’s  desire to have our fears abated through art that comforts and reassures and our need to have our minds challenged and our souls replenished. “Instead of sculpture having a soothing effect—sculpture puts, in a three-dimensional way, all of the human emotions into a tactile piece so we can touch. It nourishes us.” 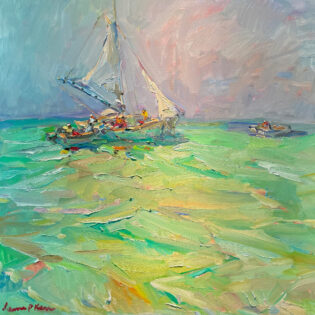