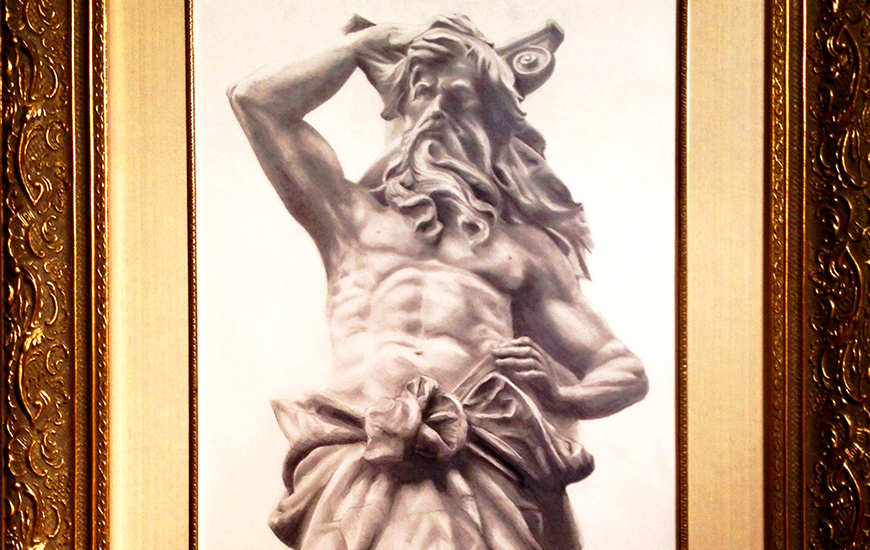 A conversation with Larry Aarons immediately reveals the visage of humility and grace, peppered to the soles with a feistiness that only an youth spent in the Bronx could produce. While Larry is adept at describing his adventures and achievements, one doesn’t feel a sense of self-aggrandizement. 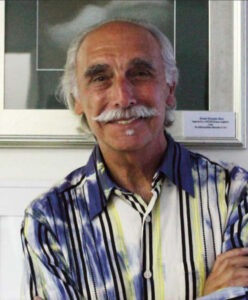 In fact, there seems to be few, if any, egocentric currents beneath the waves of the sea that is Larry’s artist heart. Generous in conversation, inclusive even in his story telling, he is quick to take a person on a joyride of his life’s history — as well as his new endeavors.

Speaking of joyriding, it doesn’t take long for Larry to weave into the narrative that he’s a lover and appreciator of beautiful, artful automotive engineering and design. As a BMW driver, he has years of experience behind the wheel of a well built machine. But he is also quick to point out that, while he loves and appreciates the collections of curators far and wide, he himself never saw a reason to own many cars.

When you ask Larry about his recent foray into fine art — that’s when he really turns the ignition and mashes the accelerator to the floor. But first, a brief history of where he came from — and where he hopes to go.

As a septuagenarian, Larry recalls his youth — that ambiguous time post-high school but pre-university — a young man very much enthralled with the sways and swells, summits and valleys of his deeply felt art instincts. He had discovered through his high school journey, there lived within him a certain intuition — an understanding of the nuances of the fine art process. 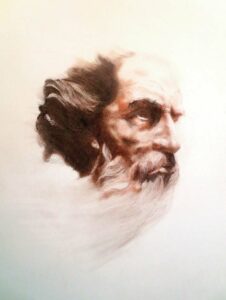 He began his higher education as an art major at Manhattan School of the Visual Arts where he was quickly identified as an individual with a unique ability in conceptual visualization. “After year one, I took a couple of classes and found I excelled in the conception of ideas. Beyond my schooling, this talent made me successful in advertising. But as a result, art became secondary in my pursuits to my Advertising Career.”

Rising through the ranks of a highly competitive industry, Larry eventually reached the pinnacle of his career pursuits. Being the man at the top has distinct advantages. He became a person who dealt in connection — establishing a network of personal renown. His integrity and insightful way won him many opportunities to influence his world.

But as with all great endeavors — Larry’s story as an ad man turned the page to its final chapter. In 2012, he stepped away from his agency and engaged in his new life post-advertising. However, it wasn’t long before he was taking art classes again — like finding an old cigarette lighter in the sand — he began striking the flint to find that old spark.

The Myths Of Man

Lately, Aarons has been producing, quite prolifically, a series of works that spring from his love of art — the foundation of what inspired him all those years ago in college. While his artistic visions were dormant — riding in the back seat to his Advertising Career — his “retirement” has allowed the opportunity for them to be reawakened.

“Finally, all that was in me back in college, re-emerged in my retirement age. I kept thinking about the way we all look — how we are all the same but all so different. What began as a one- or two-drawing concept, emerged as a theme of my work entitled The Myths of Man. 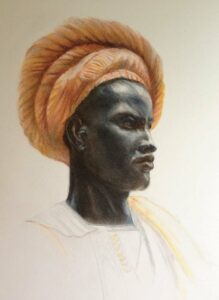 The Myths of Manseries springs from “…focusing on the human form as portraiture.” He continues, “For me it’s been the exploration of who we are, who came before us to make a difference in what our life is.” This gentle recognition of the uniqueness of being seems to be the motivation behind all of Larry’s latest work — his life’s endeavors, really.

He pauses in our conversation to pay homage to all the great creators who have gone before. “Anything that anyone has ever achieved — it never comes in isolation — we all stand on the shoulders of those who went before us. We all stand in a line.”

“The Myths of Man is exploring who it is that went before me that influenced me and what I think they looked like.” Be they great masters of fine art, or unseen forbearers of his family line, the figures Larry brings to life in his work are expressions of the connectedness of humanity.

Aarons freely shares his feeling that art has a subterranean connection to the fabric of the human tapestry. Like rhizomes between clusters of wild grass, works of art are all elaborately intertwined in a way that clues the viewer into a deeper truth.

When he discusses his preferred form of expression — classically styled portraiture — he says, “I’m much more drawn to classical art in the sense that it expresses the human experience and the uniqueness of humanity itself. It’s centered around people.

The human form epitomizes love and shape and form. Take, for example, Michelangelo’s Pietà — when I stand in front of it I’m humbled. To imagine that a human being can create something like that — that he could release the form that was in that stone — it’s wonderful.”

Larry recalls the experience of seeing “The Night Watch” for the first time. “You slowly walk toward the Rembrandt. And as you approach it, it envelopes you — it becomes the only thing you are conscious of.” 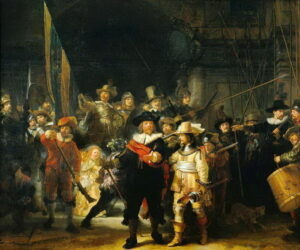 “Now, will everyone love it? I don’t know, but you experienceit. When you’re standing there, and you’re hearing your own footsteps on the marble floor, it’s the emotionality of being in the presence of something like that.”

Larry has experienced an incredible amount of positive attention over the last several years. His work has won him attention including the Presidential Award and an invitation to be the Spokesperson for Life and Art at the United Nations.

Aarons shares his recent adventures and travels as he teaches portraiture around the world. “In the past three years I’ve had wonderful success. Now I get to travel the world teaching art. I’ve been everywhere — Belgium, Russia, Italy, France, the Netherlands — teaching portraiture.”

He wistfully concludes, “I’m just so thankful that my gift — and it isa gift — has been given to me with no other purpose than just to share it. That’s what I do, I do my art and I share it. And I hope that it makes others feel good. 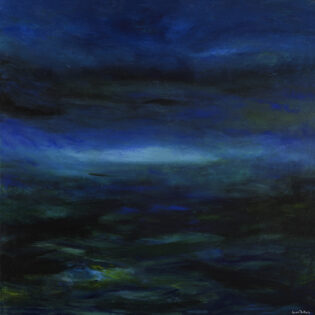