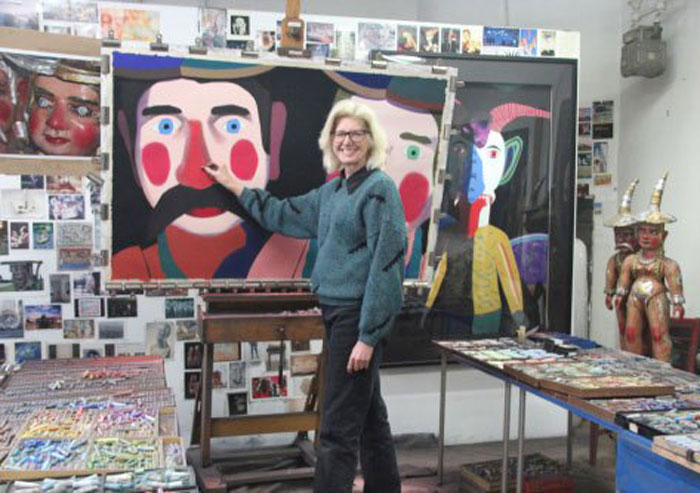 Reprinted in full from The Healing Power of Art & Artists.

Barbara Rachko is an internationally exhibited American contemporary artist best known for her pastel-on-sandpaper paintings that are inspired by Mexican and Guatemalan cultural objects. She is also the author of “From Pilot to Painter,” (available on Amazon.com), and maintains a popular art blog “Barbara Rachko’s Colored Dust” which has more than 28,000 subscribers. During her more than 30 year career as a professional artist Barbara has won numerous accolades including a Joyce Dutka Arts Foundation award and grants from the Templar Trust.

On September 11, 2001, her husband Bryan was killed in the terrorist attack on the Pentagon. She has offered to share her compelling story about her feelings of shock, loss, courage and her journey of healing through her art. She states, “The next six months passed by in a blur. But I had made a decision and pledged that I would not let the 9/11 attackers claim me as one more victim.” I am honored to share her story, the latest in our important “Artists’ Stories” series about the healing power of art.~ Renée Phillips

On June 16, 2001, I married Dr. Bryan Jack, my longtime companion and soulmate, during a very private ceremony in the garden of an historic Alexandria, Virginia residence. In attendance were a justice of the peace, me, and Bryan. He and I were 48 years old and this was the first marriage for us both. Sadly, we never celebrated an anniversary. Exactly 87 days later my new husband was the victim of a terrorist attack.

It was so unfair. I was numb and in shock. 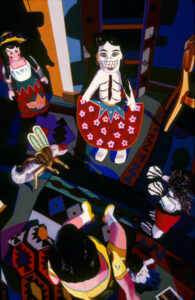 On September 11, 2001, Bryan, a high-ranking federal government employee, a brilliant economist, and a budget analyst at the Pentagon, was en route to Monterey, CA to give his monthly guest lecture for an economics class at the Naval Postgraduate College. He boarded the American Airlines plane out of Dulles Airport that was high-jacked and crashed into the Pentagon, killing 189 people.

To this day I consider how easily I, too, could have been killed on 9/11, if I had just decided to travel with Bryan to California. Plus, the plane crashed directly into my Navy office on the fifth floor E-ring of the Pentagon. (I am a retired Navy Commander and worked at the Pentagon for many years). But for a twist of fate, we both would have died: Bryan on the plane, me either beside Bryan or inside the building.

In September 2001 Bryan and I had been together for fourteen and a half years. Surprisingly, we were happier than we had ever been. At a time when other couples we knew were settling into a certain boredom and routine, our life together was growing richer and more interesting. So losing Bryan – especially then – was heart-breaking, cruel, and devastating beyond comprehension. It was so unfair. I was numb and in shock.

The following summer I was ready to — I HAD to — get back to work in my studio.

I knew exactly what I had to do. 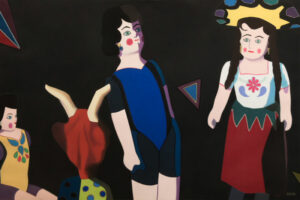 The next six months passed by in a blur. But I had made a decision and pledged that I would not let the 9/11 attackers claim me as one more victim. My life had been spared for a reason so I began to pick up the pieces and worked to make every day count. Even many years later, wasting time still feels like a crime.

The following summer I was ready to – I HAD to – get back to work in my studio. I knew exactly what I must do. More than ever before, learning and painting would become the avenues to my well-being.

In July 2002 I enrolled in a view camera workshop at New York’s International Center of Photography. Much to my surprise I had already absorbed quite a lot from watching Bryan. After the initial workshop, I continued more formal studies of photography for a few years. In 2009, I am proud to say, I was invited to present a solo photography exhibition at a New York gallery!

While this is a tragedy I will never truly be at peace with,
dealing with the loss became easier with time. 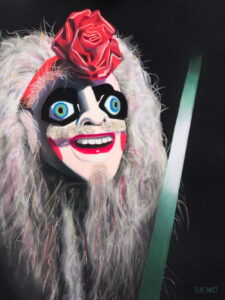 In 2003 I resumed making my Domestic Threats series of pastel paintings, something that had seemed impossible after Bryan’s death. The first large pastel painting that I created using a reference photograph taken by me confirmed that my life’s work could continue. The title of that painting, “She Embraced It and Grew Stronger,” was autobiographical. “She” is me, and “it” meant continuing on without Bryan and living life for both of us.

Having had a long successful run, the Domestic Threats series finally ended in early 2007. Around that time I was feeling happier and had come to better terms with losing Bryan. While this is a tragedy I will never truly be at peace with, dealing with the loss became easier with time.

Then in 2007 I suddenly became blocked and did not know where to take my work next. I had never experienced creative block and for a full-time professional artist, this was a painful few months. Still, I continued to go to the studio every day and eventually, thanks to a confluence of favorable circumstances, the block ended.

Continuing on the journey I began 30+ years ago,
I am looking forward to creating many new, striking pastel paintings! 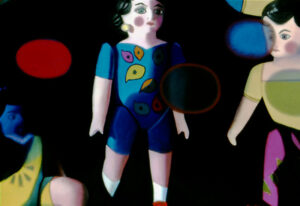 My next pastel painting series was called, Black Paintings. I viewed the black background as literally, the very dark place that I was emerging from, exactly like the figures emerging in these paintings. The figures themselves were wildly colorful and full of life, but that black background is always there.

Still the work continues to evolve. Recently I began my third pastel painting series, Bolivianos, based on a mask exhibition encountered in La Paz at the Museum of Ethnography and Folklore. Many people have proclaimed this to be my most bold, daring, and exciting pastel painting series yet. And I think they may be right! Continuing on the journey I began 30+ years ago, I am looking forward to creating many new, striking pastel paintings!

For more of Barbara’s work, visit our online gallery.

Is Art An Asset or An Investment?

When it comes to contemporary art for sale, good things come in threes. 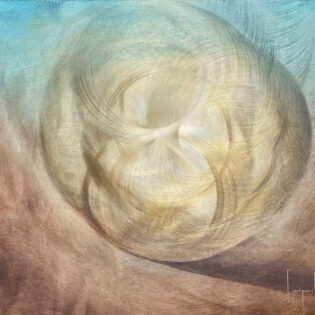