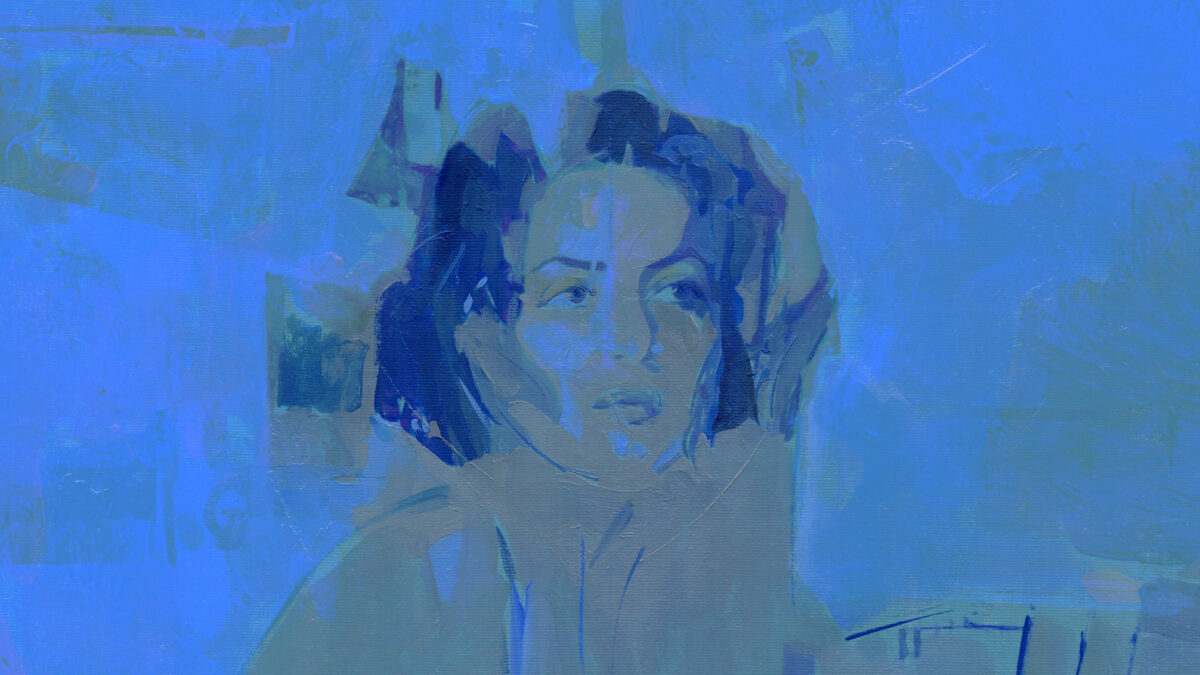 Art is art. This statement may seem simplistic, but to Jim Salvati, it is a life mantra. It’s a saying that he learned from an early mentor, Phil Hays, and has become a guide throughout his long career as a fine artist. “It doesn’t matter if it’s a theater poster I did for Edward Albee’s “A Delicate Balance” or a gallery piece from 2017 Miami Art Basel, you need to approach it the same way. Art is art,” declares Jim. 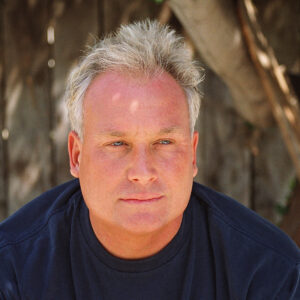 Emillions artist Jim Salvati believes art is a deep well that brings the essence of humanity to the surface. Artists are the keepers of that well. All humanity crane their necks, standing on the very tips of their toes, just trying to get a glimpse of the magic. Fine art somehow tells us who we are and where we came from.

The images, the designs, the varied colors, the myriad perspectives—they all add up to one thing: a description without words. A description of our aspirations for life, for the future, our longing for the past. This visual verbiage is an emotional language, intelligent but mute, wise but silent. It is a narrative that connects directly to the soul, completely bypassing the conscious mind and landing squarely in the gut.

Jim’s work is primarily in figurative realism and abstract paint, but as a person he is so much more. One conversation with Jim and you’ll get a portrait of a man with a wonderful sense of boundary, a huge scope of understanding about life and its pursuits and a deep gratitude for the amazing opportunities he’s had. For over 30 years, Jim has made a practice of turning his enthusiasm for life into a vibrant expression of joy, animus and every emotion in between.

When asked about his journey into fine art, he shares with a sentimental air of fond remembrance, “Basically, it was something that was in my blood—but I didn’t discover it until college. Jim’s uncle Dennis was a fine artist and was a huge influence for Jim. Dennis had given Jim his first surfboard and a look into the Venice Beach Murals. “Have you ever heard the story of Vivian Maier and her box of photographs? Well, my uncle had hundreds of paintings, collages, drawings and photographs and they are amazing! But no one had ever seen them. My sister (also an artist) and I are planning to sort through them and catalog his work one day. It’s a realization that art has always been in my family.”

Before art became a major focus for him, Jim began pursuing a career in architecture.

“My other two uncles were architects. I got into architecture and realized very quickly that it wasn’t for me, I love the art part of designing buildings because I was really good with drawing. My girlfriend at the time (who is now my wife) is also a designer and my professor, artist Everett Peck, really encouraged me to pursue art. I landed at Art Center College of Design. When I graduated, the chair of the Illustration Department, Phil Hays, asked me take over and teach his graduate class because I was killing it in the music and film industry doing album covers, movie posters and hand-drawn surf industry posters. Without my wife and my family of artists, I would never have ended up in this profession. In high school, I took art classes because the girls were there,” he says with a chuckle, “but I didn’t really discover it until my college years.” 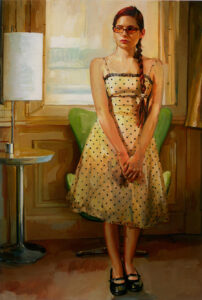 Jim shares that even as a young man, he was a hard worker. His penchant for consistency has built a practice of discipline that has carried his career forward in a remarkable way. “I’ve always had a job ever since I was a teenager. But it’s amazing how I’ve never been out of work. I feel so lucky to have survived the recession and never once suffered without work. It’s really quite amazing. Working in all art markets keeps my career vibrant and always something new around every corner. The fine art world is where I am headed and to still design for films. There are a couple of great fine artists who design for films and that is a perfect business model for me.”

Jim talks about his daily routine and his personal creative process. He works in a studio space in a building with other workspaces. He starts out first thing in the morning and works straight through to the afternoon. “Even when I walk into the building, I keep my head down and go straight to my studio. If I stop and strike up a conversation or get distracted by what’s going on around me, it derails my work flow.”

He tells his Art Center students that they have to find a way to get in and stay in what Jim refers to as “Combat Mode”. This is a state of mind that allows you to connect your conscious creative mind with your subconscious. “In order to really get work done, you have to fight for that mindset. In order to be a successful career artist, you have to produce art on a daily basis.

The idea that art cannot live on a plane separate from the journey of life and the lessons it teaches is one that Jim understands very deeply. He says those life experiences have shaped and influenced his art over the years. “As a young artist you try your best to make everything perfect… and you might get there… but as you get older, you start evolving and start subtracting and getting looser—and it becomes more about the paint than it does the imagery of the painting. You see older painters getting more sophisticated in their work…. it becomes more abstract and evolved. I’m definitely moving more abstract…. Still figurative but, exploring and finding new directions in paint.”

Jim expresses an expansive perspective of the evolution of fine art. As time goes by, the intertwining of various disciplines and mediums becomes more accepted and therefore, more prevalent in the world of fine art. “I‘ve seen illustration influence fine art and fine art influence illustration. To me, they’re are all part of the same thing.“ This statement seems to be a direct extension of Jim‘s “art is art“ philosophy. Through studious speculation, one could extrapolate that these perspectives are rooted in Jim’s early experiences with Andy Warhol’s West Coast studio for Interview Magazine. Jim documented and illustrated the thriving local art and music scene for the influential publication. “Andy was very generous and I wonder to this day where my career would have veered if he had not passed away. Andy had very fun parties as well!” remembers Jim.

Salvati’s enthusiasm for life in general and art in particular is obvious. Says Jim, “I’m more pumped about art and the business of art than I have ever been—feel like I’m in my 20s again. The demand for art and the feedback I’ve been getting has been very rewarding. It’s a new chapter—an important chapter.” 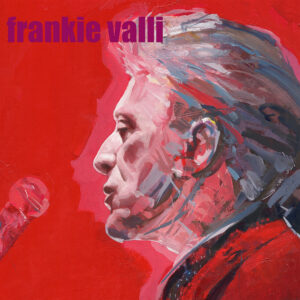 “This year I did the Frankie Valli album cover. I was scared and concerned about this one; it was intimidating. He’s such a huge star. And he’s still working—doing 70-plus shows a year. He was just in concert right by my studio. Working with Frankie and Rhino Records was such an honor and a great experience.” The estate for Frankie Valli has collected two of Jim’s paintings.

A staple of Jim’s career has been cover art for various music artists. Jim calls film and music his second loves. For him, music is the facilitator of the mood he wishes to strike while he works. When asked to name his three favorite bands, he quickly lists twenty or so—diverse artists ranging from grunge, classic rock and quirky Beatles B-sides to Nina Simone and alt-indie band, The Books. His love of music has put him in the orbit of heavy-hitters that include Bruce Springsteen and Radiohead. Both covers were featured in the Rock & Roll Hall of Fame “Greatest Albums Never Seen” exhibition. “I was teamed up to work with the great Herb Ritts on the Springsteen cover—another important moment for me,” Jim reminisces.

He lists his favorite album art projects in chronological order. “I’d have to say Peter Tosh mostly because it was my first one. My second favorite was Curtis Mayfield with the legendary art director Tommy Steele. Number three would have to be my recent work on the Ella Fitzgerald cover. The art director, Hollis King, also a legend in this industry, hired me to do the cover. Having worked with Verve Records in New York was huge, especially with Hollis. The Ella painting was purchased for her estate and that’s a huge honor.”

Jim is accomplished on many fronts. In addition to creating numerous album covers and working with world class musicians, he has worked for many film studios including Disney, Warner Bros. and Sony Pictures to name a few. “Everything starts with art. Everywhere you go, you see art first. It‘s always art first. Before they make a film, there’s concept art or development art.” Jim’s work as master illustrator for the Harry Potter films resulted in hundreds of paintings for the franchise. 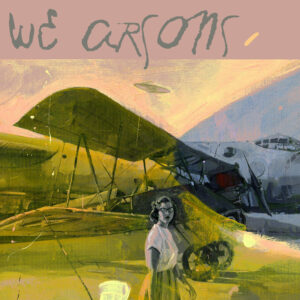 We Arsons by Jim Salvati

More recently, Jim won the 2017 Communication Arts Award of Excellence for his painting in oil, Bathing Cap at the 2016 Art Basel World Art Expo. Another in his series of paintings of American pool culture, Pool, won the prestigious National Portrait Society award this year. For these distinguished accolades, Salvati is openly humbled and grateful. In his endearingly approachable manner, he takes it all in stride. “The award is a confirmation of my approach and is an encouragement to pursue new directions and reach new levels.”

Talking to Jim, it’s immediately apparent that he is a positive influence in his life and relationships. Like his work, his conversation has a lightness and an ease that is rare. Laughing, he says, “I’m an extreme optimist; it’s hard to bum me out. I always see the glass half-full and strive to better myself and my work. Many people keep this art machine moving and credit and thanks goes to Marlissa, Carolyn, Lily, Ann, Leslie, Marcia, Nicole, Phylicia, Piper, Pat, Michael, Noka, Tim, and Elizabeth, creative agents who represent my work well.”

Take a look at Jim’s creativity on Emillions Art and see how his unique perspective, artistic intuition and creative process converge in his numerous works. 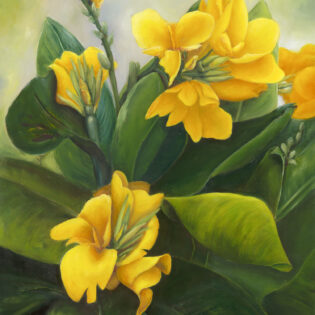