One of the most captivating artists of the 21st century, never got to see it. Jean Michel Basquiat’s meteoric rise to fame began in the late 70s as one half of the graffiti duo, SAMO, with urban artist, Al Diaz. Their street-art-driven, play-on-words social commentary on the city’s buildings and edifices gained them notoriety among New York’s Lower East Side underground scene.

By the time SAMO broke up in 1980, Basquiat was already on his nascent rise toward art world acknowledgment and fame. That same year, Baquiat, part of the vibrant and gritty punk and graffiti scene, presented his artwork as part of the cutting-edge DIY Time Square Show, held in an abandoned massage parlor. He showed alongside artists who would go on to define contemporary art for years to come: Kiki Smith, Keith Haring, Kenny Scharf, Jenny Holzer, and others.

During this period, Basquiat met Andy Warhol and began a series of collaborations with the pop artist and icon. By 1981, his artwork appeared in several notable New York exhibitions, which led to his first solo show in Modena, Italy. Basquiat became close with the art gallerist, Larry Gagosian, who showed Basquiat at his West Hollywood gallery. Partnerships with New York galleries soon followed, as well as solo shows Stateside and on the international circuit. By the mid-80s, Basquiat had truly arrived—his taking the art world by storm cemented by his image on the cover of New York Magazinein February, 1985.

Basquiat maintained an art style all his own, from floating, dead-eyed skulls to almost-monolithic figures standing against vivid and graffiti-strewn backgrounds. He incorporated his other artistic drives in his visual work: hip-hop, rap, music, jazz, bebop, poetry, and drew inspiration from Cy Twombly, Robert Rauschenberg, Andy Warhol, Jean Dubuffet, and Pablo Picasso. The powerful social commentary of Basquiat’s works touching on social upheaval, income inequity, racism, injustice—in a manic, complex overdrive of words, symbols, and graphics surrounding crude and simplistic figures—links him to the Neo-Expressionist movement. Neo-Expressionism marked a conscious move away from minimalism, towards a deliberate mode of visual storytelling that incorporated cultural, religious, mythological and figurative elements. Basquiat’s use of color and symbol invited the viewer to come and take a closer look and see something new upon each viewing.

Despite Basquiat’s atmospheric success, the artist died of a drug overdose in 1988. By that time, his work was sought after by savvy collectors and continues to be over 30 years later. In 2017, his painting, “Untitled,” painted in 1982, sold for a record-breaking $110 million at auction. At the time of his death, he had an archive of over 600 paintings and 1,500 drawings. Safe to say that the multi-million-dollar race to own a Basquiat has only just begun. 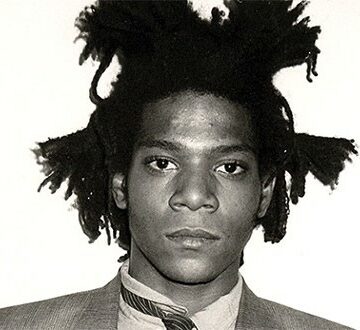