Francisco Goya was a Spanish romantic painter and printmaker. He is considered the most important Spanish artist of late 18th and early 19th centuries and throughout his long career was a commentator and chronicler of his era. Immensely successful in his lifetime, Goya is often referred to as both the last of the Old Masters and the first of the moderns.

He became a court painter to the Spanish Crown in 1786 and the early portion of his career is marked by portraits commissioned by the Spanish aristocracy and royalty, as well as the Rococo style tapestry cartoons designed for the royal palace.

After 1793 his work became progressively darker and pessimistic. His later easel and mural paintings, prints and drawings appear to reflect a bleak outlook on personal, social and political levels, and contrast with his social climbing. He was appointed Director of the Royal Academy in 1795, the year Manuel Godoy made an unfavorable treaty with France. In 1799 Goya became Primer Pintor de Càmara, the then highest rank for a Spanish court painter. In the late 1790s, commissioned by Godoy, he completed his La maja desnuda, a remarkably daring nude for the time and clearly indebted to Diego Velázquez. In 1801 he painted Charles IV of Spain and His Family. In 1807 Napoleon led the French army into Spain.

He remained in Madrid during the Peninsular War, which seems to have affected him deeply. Although he did not vocalise his thoughts in public, they can be inferred from his “Disasters of War” series of prints (although published 35 years after his death) and his 1814 paintings The Second of May 1808 and The Third of May 1808.

Other works from his mid period include the “Caprichos” and Los Disparates etching series, and a wide variety of paintings concerned with insanity, mental asylums, witches, fantastical creatures and religious and political corruption, all of which suggest that he feared for both his country’s fate and his own mental and physical health.

His output culminates with the so-called “Black Paintings” of 1819-1823, applied on oil on the plaster walls of his house the “Quinta del Sordo” (house of the deaf man) where, disillusioned by domestic political and social developments he lived in near isolation. Goya eventually abandoned Spain in 1824 to retire to the French city of Bordeaux. 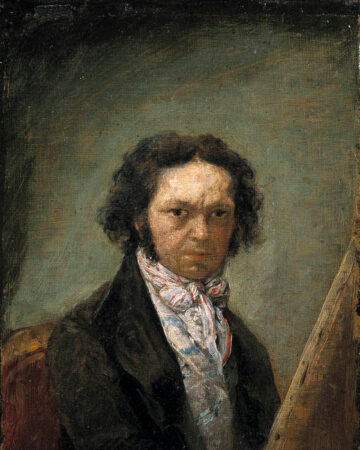