John Myatt’s creatively notorious or notoriously creative path has led him to both high highs and pretty low points. He had a promising start as an artist with unique talent and skill. Then life threw him a curveball which led him to use his talent for forging the works of the masters to be sold at auction for hundreds of pounds. Although Myatt’s accomplice took most of the money, Myatt eventually paid with time in prison. Scotland Yard dubbed Myatt, “the biggest art fraud of the 20th century.” After his stint behind bars, the police guards gave him an idea and became his first patrons post-prison, asking him for family portraits or commissions. He then embarked on another creative endeavor, a painter of ‘genuine fakes.’ With a meticulous eye and an understanding of how to manipulate his materials, Myatt swirls the vibrant hues of Van Gogh, he studiously replicates the look of 15th century paintings with modern additives; he can recreate a Matisse before your very eyes. Happily, he can now put his own name to them. His works now have a certain notoriety on the market, no doubt, thanks to his highly unorthodox background.

Based on his infamous past, Myatt is the subject of a 2009 book, Provenance, by Laney Salisbury and the late Aly Sujo; a documentary; and a narrative film based on his life is in production. He most recently collaborated with micro sculptor, Willard Wigan, to create Mona Lisa: The Secret in the Eye, an artwork mimicking the Da Vinci masterpiece, but with a 1mm square Mona Lisa set in the left eye of the painting. 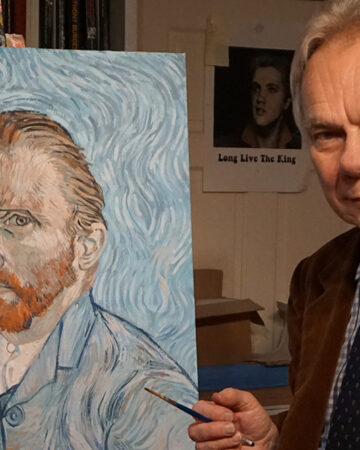