Eli Kuslansky is an artist, chef, as well as a co-founder, partner and chief strategist at Unified Field, an international award-winning creative innovation firm. He specializes in media art installations, design technology, digital communications, immersive responsive environments, and integrated omni-channel me-dia programs. With more than twenty years’ experience in the industry, he has managed the conceptualization and integration of advanced technology based systems in media art installations for a variety of design firms and software companies. Prior to starting Unified Field with Marla Supnick, Mr. Kuslansky was Director of Technology and Interactives at Ralph Appelbaum Associates, internationally known museum designers.

His work has appeared at the Bronx Museum of Art, at Ronald Feldman Fine Art and other venues throughout the world. Mr. Kuslansky was a former board member of Exit Art and the New Media Executives committee for the UJA Federation. He is a board member of the Industry Applications Board for Columbia University’s Center for Advance Technology, and  was the chairman of the Art and Cultural Special Interest Group for The New York New Media Association. He was on the advisory board for the M.I.T. Enterprise Forum. He is currently an adviser for the Weeksville Historical Center and the Universal Hip Hop Museum.

In my practice as an artist, I feel like a poet, soothsayer, and precision instrument maker. I am less interested in making an object to look at, than in constructing devices that reveal something about the quality of the environment in which they are placed. My sculptures are like devices that use the physical and poetic properties of light to express an aspirational interpretation of our natural world. These “devices” are drawing-in-space sculptures constructed of mirrored stainless-steel rods and tubing arrayed in repeating forms that evoke common household objects at architectural scale, characters in a play, animal bones, and vehicles of conveyance. These sculptures act like filters of the natural world to distinguish and scale aspects of the phenomena of light and how it functions with form.

My work is a statement about the connections between time, light, measurement, and perception. It is about how we use instruments to gauge size, space, distance and the passage of time by the changing light. In my work, I explore how we communicate complex ideas, visions, and emotions through a visual language, and how our unique ability to measure lends dimension to our perceptions.

Time, light, measurement, and perception are evoked in my work in a number of ways. As I am first and foremost a draftsman, my orientation to art is primarily through drawing. In my work, I create a perception of time through visual references that correlate how hand drawing—an artistic endeavor almost as old as the human race itself—can be expressed in a 21st-century context with forms that can only be produced by digital imaging and fabrication.

Measurement is expressed through the use of 3D modeling and rendering software to design the sculpture’s shapes, angles, and orientation to precisely reflect, diffuse, and diffract light so it creates patterns commonly known as moirés. These interference patterns of nanometer precision happen when light waves pass through the narrow intersections of the sculpture’s rods in a space too small for the wavelengths, so they cancel each out creating a darkness that is not shadows but the total absence of light. These patterns reveal the internal structure of the sculpture’s forms in an alternative depiction system connected to, yet distinct from, classical art. It is through these means, that I am creating a unique body of work and a visual language that is of our time. – Eli Kuslansky 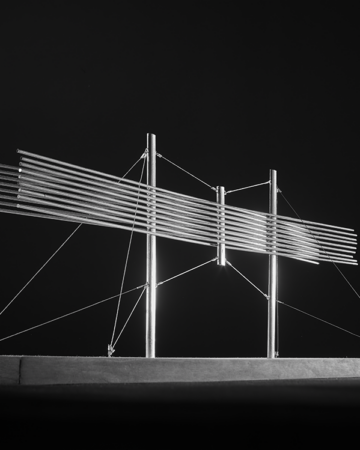